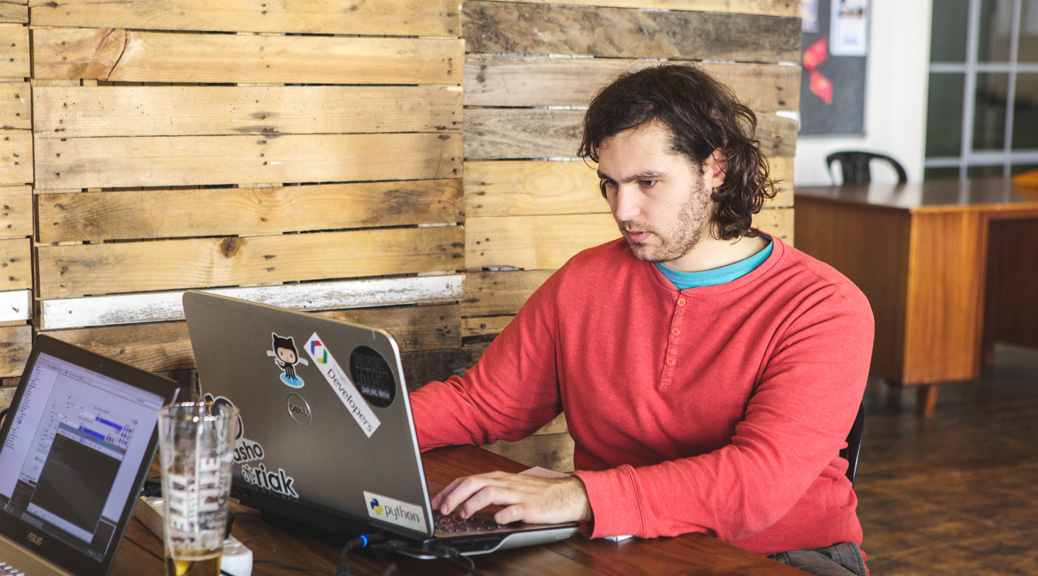 Moving to a new place is never easy. If you just arrived in Berlin, I can’t help with paperwork or finding a flat, but I can probably do something to introduce you to the local game scene. So let’s get to know Richard Baxter!

Please introduce yourself and your work.

My name is Richard Baxter. I’m a game developer/programmer, learning game design as I go along. Most recently I’ve been working on Trip the Light Fantastic with Free Lives which got nominated for an A MAZE. award (still kinda can’t believe that!). Previously I worked on interactive displays and mini games for museums and before that I developed mobile games, including an FPS called Neon Shadow. I also love jamming games with different people and testing out new game mechanics and styles. Oh, and Joust, really like playing Johann Sebastian Joust!

When did you arrive in Berlin?

About a month and a bit ago (end of March). I still feel like a bit of a tourist but I think I’m starting to adjust… until I remember that my German is still very, very poor. Then I feel like a tourist again as I fumble through basic sentences! I’ll learn the language soon enough.

In which places have you lived before moving here?

I lived nearly all my life in Cape Town, South Africa. There is a great community of people there making games. Other than that only a few months in London and an academic internship in Nice, France and in the Netherlands.

I’ll miss Cape Town everyday, but myself and my partner didn’t want to live our whole lives in the same country. The more difficult decision was which country to move to. We knew we wanted to see and visit most of Europe so any European country was a possibility. I especially wanted to be closer to conferences and game development related events, it’s about 700/800 euros just to get from South Africa to Europe, not to mention living costs, which were far more than I could afford.

When we decided on Germany, Berlin was the most natural choice. There is a thriving game development industry here and it’s a very global city, so most people speak English which would help us ease into a new place a lot better. Not to mention the history of the city, tons of museums (which we love) and it’s a fairly cheap city to live in (by Germany standards). I didn’t realise how awesome it would be here though! There are so many beautiful places to see, and most people I’ve met are very friendly, open and accepting. It’s lovely!

Was it difficult to find a place to stay? In which neighbourhood do you live now?

We are in a temporary flat at the moment so we’re still deciding where exactly we would like to live. I’m still getting a feel for the different neighbourhoods so I don’t even know what areas I prefer just yet. Though, I’m really not too bothered where we end up to be honest, the public transport is so good that I can get nearly anywhere fairly easily as long as we are more-or-less in the city. So for now, I’m just happy to be anywhere in Berlin :)

What’s the most interesting discovery you’ve made since moving here?

Something I was told by many people that I’ve only truly realised when I got here was that: no matter who you are or what you are interested in, there is almost certainly a group or a place you can go to be involved in that interest. For me, this is games and absolutely, the games scene is quite vibrant here! I really love it. But even outside of games, if you have an interest it’s likely that you’ll find some of your people here to share that interest.

So for instance, among my top interests are history, game dev, and cricket (I know, the three complement each other so naturally…)
Berlin has history and game dev for certain, but also seven cricket clubs. Seven! I didn’t expect there would be even one. That was an interesting discovery I’d say :p

Also, I don’t watch much e-sports besides Starcraft 2 but there is a dedicated e-sports bar in Berlin, that is damn cool in my books. (Note by Lorenzo: actually there are 2 e-sports bars in Berlin – Meltdown and Interface!)

Any message for all the Berliners out there?

Firstly, Berliners, you’ve been so awesome and welcoming. Your city rocks! Also, for any fellow game developers, designers, makers, game companies: if you’re looking for a game developer/programmer, contact me on Twitter @raxterbaxter. I love what I do and I’ve spent a lot of (actually way too much) time getting proficient at it. I am available to do full-time or part-time work so let me know if there is a project I could be of value to! Or even if you just want to jam a game sometime, get in touch! I always love a good jam. Looking forward to meeting you all soon!

Find out more about Richard’s work at raxterworks.com and make sure to tell him “hello & welcome to Berlin” the next time you see him.