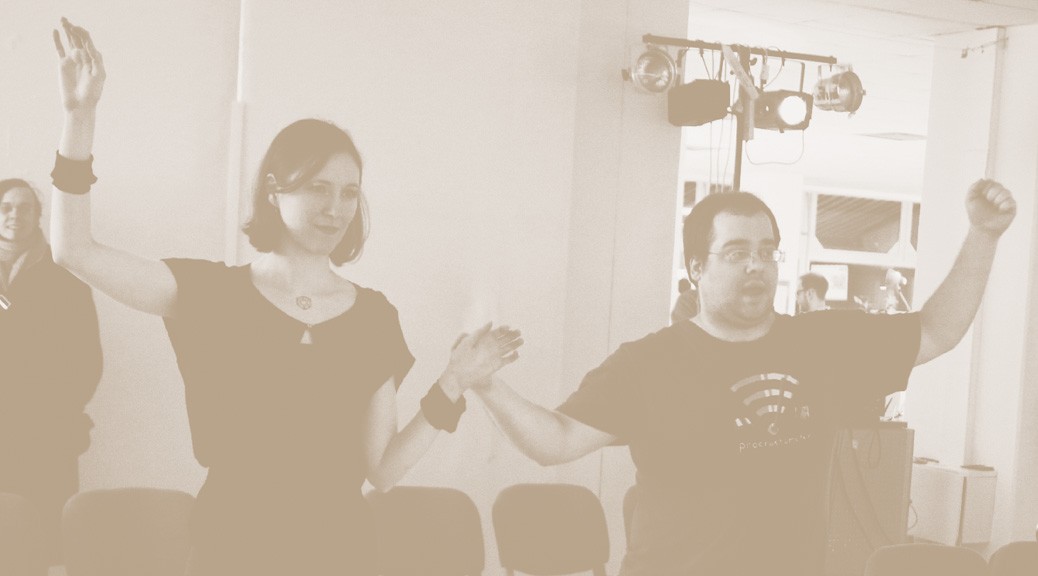 Talk & Play is a free event organised by BerlinGameScene.com that provides the opportunity to game enthusiasts, players and makers to meet and exchange knowledge in a friendly, relaxed and safe environment. It’s also the reason why this site exists.

Talk & Play #11, which took place on February 25 2015, was a special one: it was the first organised independently, without the support of OpenTechSchool, and also the first happening at Supermarkt instead of co.up – a venue I love, but that’s too small for what the event has become.  Because of these “firsts”, I must admit I was initially unsure of what to expect in terms of participation from the public. In the end, 150 people showed up, making this the most crowded edition of the event so far!

The BerlinGameScene.com safe space policy was introduced for the occasion and received some very positive feedback, several participants praised the inclusive atmosphere of the event and this made me ultra happy – creating an environment where everyone feels safe and comfortable is one of my main goals as an event organiser. That being said, I’m aware things can still be improved, but I hope this will inspire others to adopt similar policies, even for smaller events.

The event — in pictures

The magical Julian Dasgupta took a set of 100 (!) pictures during the evening, here’s a small selection:

The crowd from the left. Picture by Julian Dasgupta (@spunior) – www.dippy-weasel.com

The crowd from the right. Picture by Julian Dasgupta (@spunior) – www.dippy-weasel.com

The audience is amused. Picture by Julian Dasgupta (@spunior) – www.dippy-weasel.com

Luke Spierewka and Titouan Millet were in town for The Brain – Open Lab project and came to say hello. Picture by Julian Dasgupta (@spunior) – www.dippy-weasel.com

KinectMagic by Tobias Wehrum was pretty funny to watch (and to play, too!). Picture by Julian Dasgupta (@spunior) – www.dippy-weasel.com

Not sure what this game was! Picture by Julian Dasgupta (@spunior) – www.dippy-weasel.com

Allan Cudicio spoke about understanding how we limit ourselves when choosing settings for our games, and how to overcome this by exploring more cultural diversity.

Ruth Bosch shared some tips on how to make it through a game jam without panicking. She promised to write a blog post about this in the future – looking forward to reading it!

Riad Djemili and Johannes Kristmann also made a brief appearance on stage, to ask the Talk & Play audience for help recording some sounds for The Curious Expedition: more precisely, they were looking for a cheering crowd and a mumbling crowd. We didn’t disappoint! All the audio files are now available on Freesound.org, licensed under the Creative Commons 0 License, meaning they’re public domain: feel free to use them as you like for any of your projects!

As usual, during the second part of the evening all Talk & Play attendees have the possibility to show their games for people to play. Around 20 game makers did it this time, I’m probably missing a couple (let me know if I forgot yours!), but here’s most of them: CardCrawl by TinyTouchTales, Curious Expedition by Maschinen-Mensch, DYO by Team DYO, Flirtevator by Flirtevator Team, Freya by Children of Freya, Hatchlings by Snorkel Squad, Hylaria by Fablesmith, Legends of Pixelia by Florian Siemer, KinectMagic by Tobias Wehrum, Mathemagics by Adam Streck, Naut by (members of the) Klondike collective,  pixelBOT Extreme by frixels, PongJutsu, Redshift Blueshift by Will Blanton and Jacob Alan McCosh, Runic Rampage by Alexander Leps, SwapQuest by Rebusmind, Super Awesome Wheelchair Zombie Escape by Team SAWZE, Teslapunk by klutzGames, The Truth About Ada, What the Shell by Ludisto.

Scroll through the BerlinGameScene.com Vine channel for a quick overview of the games.

A big thank you to: Tristan, Beatrice, Luca L & Luca S (for their help making things run smoothly during the event), Iwan Gabovitch (for recording the talks, even though my camera stopped working at some point), Julian Dasgupta (for all the  wonderful pictures, including the one on top of this page – if you want to use any of them remember to ask him first!), the lovely Supermarkt team.

Marcus Richter aka monoxyd wrote a blog post about his favourite games of the evening, just a few hours after the event – that’s what I call a professional!

The next Talk & Play is going to take place on Wednesday, April 15th. Program details will be online three weeks before the event, but you can already RSVP on meetup.com and Facebook.