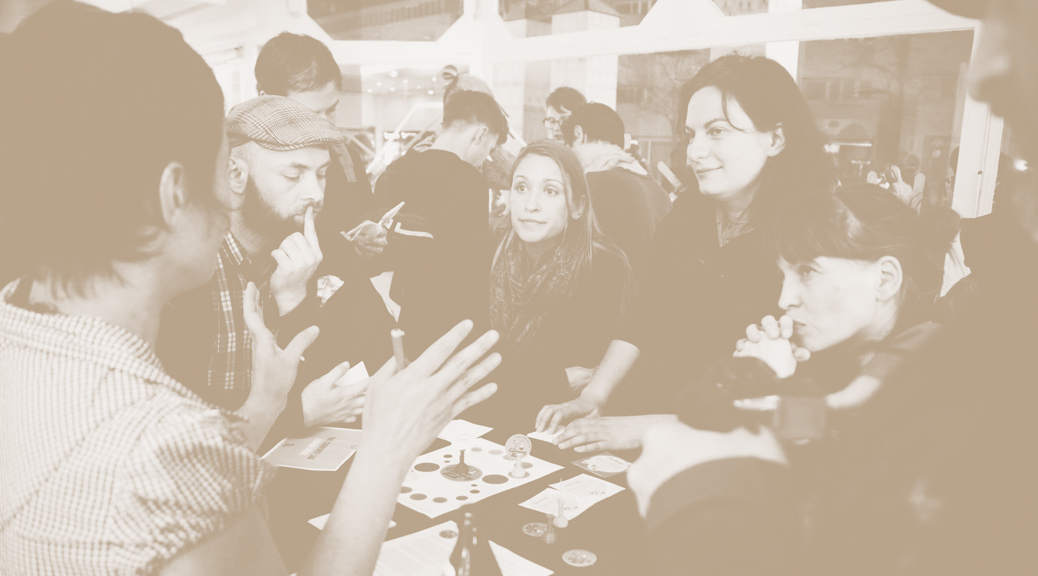 Talk & Play is a free event organised by BerlinGameScene.com that provides the opportunity to game enthusiasts, players and makers to meet and exchange knowledge in a friendly, relaxed and safe environment. It’s also the reason why this site exists.

The event – in pictures

Ooops! Julian Dasgupta did it again: he took a bunch of beautiful pictures. He’s basically the King Midas of event photography. You can find the full set here and this is a selection I’ve made:

Stephie Theodora has great taste when it comes to jokes. Picture by Julian Dasgupta (@spunior) – www.dippy-weasel.com

A list of jobs Stephie Theodora had. Picture by Julian Dasgupta (@spunior) – www.dippy-weasel.com

Me and Chris striking a pose. You should subscribe to his weekly newsletter by the way: http://tinyletter.com/chrilson. Picture by Julian Dasgupta (@spunior) – www.dippy-weasel.com

I can still see you. Picture by Julian Dasgupta (@spunior) – www.dippy-weasel.com

Are you having a laugh? Picture by Julian Dasgupta (@spunior) – www.dippy-weasel.com

Since the event took place the week before the International Games Week Berlin 2015, I decided to do things a bit differently (to offer some variety to people attending both events) and have a selection of non-technical talks, two of the focused on analog games.

Scott Bolden introduced us to I.G.O. (Improvisational Groove Orchestra), a game he is developing where the players engage in an active and fun collaboration of personal, social and aesthetic sustainability; a game where all players can win as much as they like. (Don’t miss the jamming from 11:30!)

Lenara Verle presented The Currency Lab, a board game created as a way to interactively learn the basic concepts of currency design: just like in real life, the path to a successful new currency (Euros, Bitcoins, Frequent Flyer Miles…) entails many challenges that must be overcome by choosing and creating strategies.

Stephie Theodora mapped out her journey from fan girl to intern to game designer at Wooga in her talk “Breaking into the Gaming Industry” – a crash course in pursuing one’s dream without any contacts or design school certificates.

Alfred Ladylike played her new song The #Femcrunch Blues (inspired by The Curious Expedition) and gave a lightning talk to share some personal anecdotes related to sexism in the gaming industry.

During the second part of the evening all Talk & Play attendees have the possibility to show their games for people to play. Here’s the list, if I’ve forgotten yours let me know!

– The Curious Expedition by Maschinen-Mensch

– The Currency Lab by Lenara Verle

– Fuzzytopia by we two make games

– Of Carrots And Blood by Trite Games

– Redshift Blueshift by Will Blanton and Jacob Alan McCosh

– What the Shell by Ludisto

A big thank you to: Tristan, Beatrice & Luca S (for their help making things run smoothly during the event), Nomi Nanako (for recording the talks on a very last minute notice), Julian Dasgupta (for all the  wonderful pictures, including the one on top of this page – if you want to use any of them remember to ask him first!), the lovely Supermarkt team.

The next Talk & Play is going to take place on Wednesday, June 17th:  you can already RSVP on meetup.com and Facebook.